SPRINGFIELD – Valley Eye Radio is seeking volunteers to read and record articles from local newspapers and magazines, including The Westfield News.

Valley Eye Radio (VER) is a nonprofit based in Springfield. 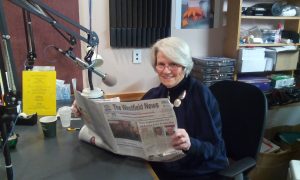 According to Harold Anderson, VER program director, the free broadcast service provides readings from local newspapers, publications and information for broadcast in an accessible format for those who are blind or visually impaired as well as for those who have some other health condition or disability that makes it difficult for them to be able to access print information independently for themselves.

“Our service area includes Hampden, Hampshire and Franklin counties,” said Anderson. “VER’s mission is to combat the social isolation that can accompany these conditions by providing connection for our listeners to the news, information and events from their local communities.”

Volunteers dedicate as little as an hour each week – or more if they have the time – to provide the service.

“Our volunteers are a diverse and dedicated family of people who share one thing in common: A strong desire to help those who need our service to get the information that they need for themselves and to know that they are not alone,” said Anderson.

Anderson said volunteers do a variety of recordings depending on their availability and interest.

“We have readers that read just a few articles a week all the way to some volunteers that read three or four full programs a week and everything in between,” he said. “We are very flexible with working with whatever our dedicated volunteer reader family is able to provide us regarding their time. Generally, we suggest budgeting about an hour of time to complete a standard length half hour program which includes time to review the material and do the recording itself. Currently, we are especially in need of volunteers to fill-in for reading from the major local newspapers such as the The Westfield News and on weekends.”

VER began in 1979 as a small group of dedicated individuals who were sensitive to the needs of those who could no longer read independently. They decided to create broadcasts of readings from local newspapers and publications to help them get the local information that they could no longer get for themselves.

Over the years, said Anderson, this service, which became known as the Valley Radio Reading Service (VRRS) became affiliated with a number of non-profit organizations including Goodwill until it later became its own 501 (c) 3 non-profit organization. VRRS joined with other such services to form a statewide network of radio reading services in Massachusetts.

“A few years ago, VRRS changed its name to Valley Eye Radio as we began a modernization program to bring our service into the 21st century to better serve our listeners,” Anderson said.

In a sense, VER is a radio station that you can’t hear on the radio. It does not have its own transmitter or tower and uses side band frequencies of a few existing commercial broadcast stations to carry its programming.

Anderson said they are working on upgrades that would allow those who need VER services to access the broadcast directly from the VER website or their smart speaker.

COVID-19 definitely had an impact on VER this past year.

“The pandemic has brought about many changes to how we perform our service with the majority of our programming currently being done by volunteer readers from their own homes using their own computers and microphones.,” Anderson said. “As a response to the Covid-19 crisis, we expanded our programming to read all major local newspapers during the entire week as well as the local community newspapers as close to their publication dates as possible.”

Other publications, including national magazines, are read, plus trivia and rebroadcasts from local organizations such as Baystate Health, round-out VER’s offerings.